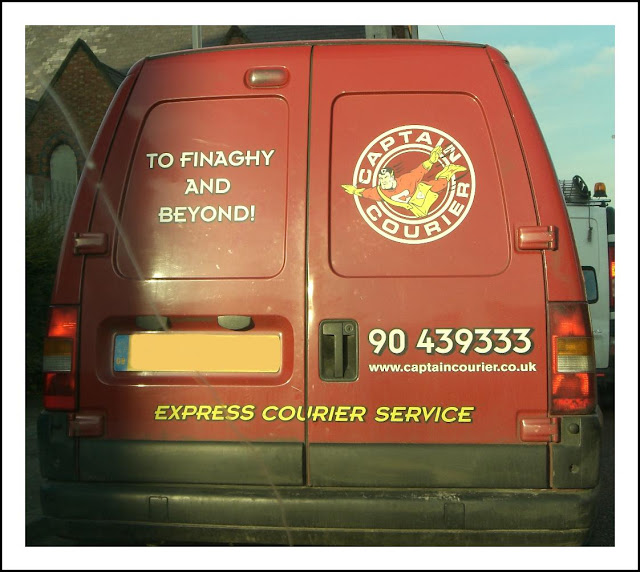 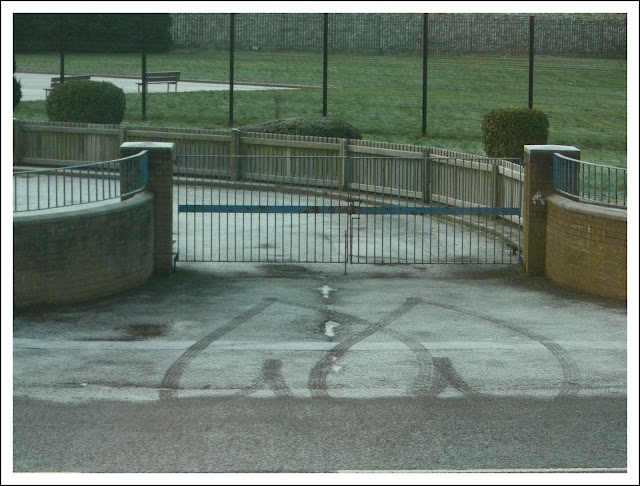 The Passenger From Hell

…….. that’s me and proud of it (might have something to do with the hormones).
I have currently been making life hell for some of the Metro Inspectors at the bus stops round the City Hall. Any of you who are unfortunate enough to have to rely on the Metro bus service will know just how unreliable they can be. Take this morning, for instance, the 8.05 service hasn’t shown up once again and I spot an inspector within speaking distance, so:

ME: ‘excuse me, can you tell me what has happened to the five past eight bus?’

HIM: ‘I’m just waiting for it to arrive’

ME: ‘we know it’s a bit late, we can tell that from the clock’

….. and he is astounded when I inform him that his job is worthless. What is the point of employing these people if they can’t keep you informed about delays nor can they think up a more original excuse than ‘it’s a bit late’? As far as I can see, they spend most of their time avoiding the passengers. (I suppose with exasperated passengers like me around you can hardly blame them – I’m just waiting for one to take to his heels and run!!) I did see one inspector, last year, remove his cap so that he couldn’t be easily recognised and try to skulk past the mile long queue of angry passengers (foolish man! – I soon cornered him).

I, stupidly perhaps, am of the belief that their job is to ensure that the buses run on time and that passengers are not inconvenienced.
at 10:14 am

A Christian bus driver has refused to use a vehicle with the atheist slogan: "There's probably no God".

Ron Heather, from Southampton, responded with "shock horror" at the message and walked out of his shift in protest.

Mr Heather said: "I was just about to board and there it was staring me in the face, my first reaction was shock horror.

"I felt that I could not drive that bus, I told my managers and they said they haven't got another one and I thought I better go home, so I did.

"I think it was the starkness of this advert which implied there was no God."

He has since agreed to go back to work with the promise he would only have to drive the buses if there were no others available.

First Bus said in a statement: "As a company we understand Mr Heather's views regarding the atheist bus advert and we are doing what we can to accommodate his request not to drive the buses concerned."

NOW, all we need is for the atheist drivers to refuse to drive buses carrying religious posters!

.......... more than 200 people complained to the Advertising Standards Agency about the posters, which were created by Ariane Sherine, a comedy writer, as an antidote to religious adverts on public transport that "threaten eternal damnation" to passengers.

The watchdog is now considering whether to investigate the campaign on the grounds that it is offensive, or that its central claim about God's existence cannot be substantiated. telegraph.co.uk

Surely the central claim about God's existence not being substantiated should also be applied to poster campaigns by religious groups, which, in turn, should be investigated by the Advertising Standards Agency on the basis that they may be offensive to atheists. Obviously atheists are more tolerant, since they don't complain about religious posters - perhaps we should?
at 11:11 am

Pic of the day 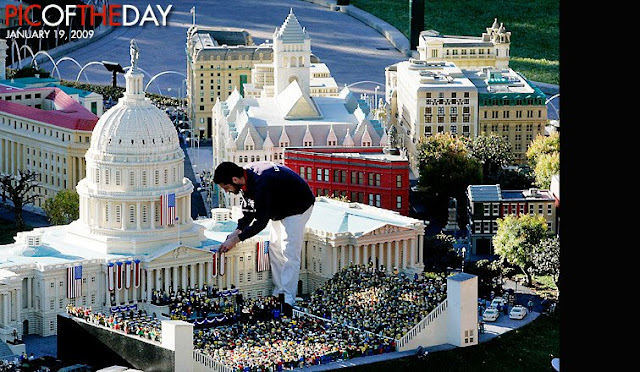 Model builder Gary McIntire puts the finishing touches on a Lego presidential inauguration scene at Legoland California. Metro.co.uk
at 8:59 am 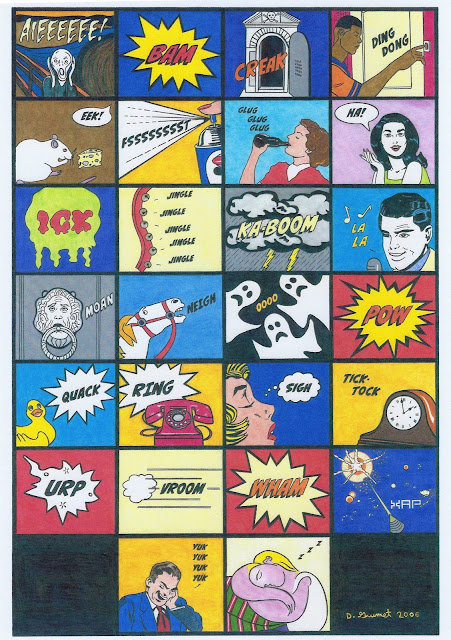 Here's something for the kids - a poster by Deborah Grumet - which can be purchased from ABCs of Art
at 9:29 am

Patrick McGoohan, the Emmy award-winning actor who created and starred in 1960s TV show The Prisoner, has died at the age of 80.

McGoohan was best known as the title character Number Six in surreal drama The Prisoner, which aired on ITV in the UK. He played a former spy who is held captive in a small village and constantly tries to escape.

He also won two Emmys for detective drama Columbo, playing different characters, with the first coming in 1974 and the other 16 years later.

McGoohan, who was born in New York but raised in England and Ireland, came to screen prominence in ITV's early 1960s drama series Danger Man, in which he played a secret agent.

He was also considered for the lead role in the first James Bond movie, Dr No, before Sean Connery was cast.

However, it was The Prisoner, which aired originally on ITV between 1967 and 1968, with which he was chiefly associated, writing some of the episodes himself under a different name.

His character, Number Six, spent the entire time attempting to escape from a prison – which was disguised as a holiday camp – and trying to find out the identity of his captor, the elusive Number One. He repeatedly declared: "I am not a number - I am a free man!"
More:
at 8:53 am

French director and producer Claude Berri, best known for Jean de Florette, has died of a stroke at the age of 74.

He passed away in a Paris hospital, where he was admitted on Saturday.

Known as the "godfather" of French film, Berri worked with generations of top French actors and won an Oscar for his 1963 short film Le Poulet.

Born Claude Langmann to working-class parents in Paris, he started his cinematic career as an actor but gave it up to concentrate on making short films.
More:
at 8:53 am 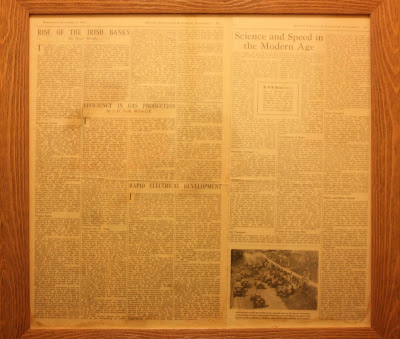 After our walk by the Lagan on New Year's day we stopped in Bob Stewarts for a hot drink and while there came across this page from the News Letter of 1st September 1937. What is interesting about this is the article entitled 'Higher and Higher Speeds' which talks about the invention and advent of television. What it says is as follows: 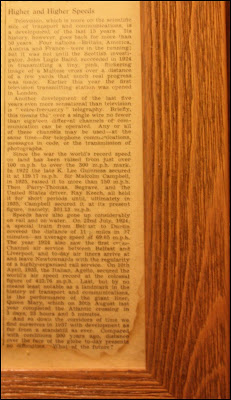 Television, which is more on the scientific side of transport and communications, is a development of the last 15 years. Its history, however, goes back for more than 50 years. Four nations -- Britain, America, Austria and France -- were in the running; but it was not until the Scottish investigator, John Logie Baird, succeeded in 1924 in transmitting a tiny, pink, flickering image of a Maltese Cross over a distance of a few yards that much real progress was made. Earlier this year the first television transmitting station was opened in London.

... and we thought television was a fairly modern invention, when in fact it dates back to the 1870's.

The first time images were transmitted electrically were via early mechanical fax machines, including the pantelegraph. The concept of electrically-powered transmission of television images in motion, was first sketched in 1878 as the telephonoscope, shortly after the invention of the telephone. At the time, it was imagined by early science fiction authors, that someday that light could be transmitted over wires, as sounds were.

The idea of using scanning to transmit images was put to actual practical use in 1881 in the pantelegraph, through the use of a pendulum-based scanning mechanism. From this period forward, scanning in one form or another, has been used in nearly every image transmission technology to date, including television. This is the concept of "rasterization", the process of converting a visual image into a stream of electrical pulses.

In 1884 Paul Gottlieb Nipkow, a 20-year old university student in Germany, patented the first electromechanical television system which employed a scanning disk, a spinning disk with a series of holes spiraling toward the center, for rasterization. The holes were spaced at equal angular intervals such that in a single rotation the disk would allow light to pass through each hole and onto a light-sensitive selenium sensor which produced the electrical pulses. As an image was focused on the rotating disk, each hole captured a horizontal "slice" of the whole image, in a scanning fashion.
at 3:36 am

Gaza: Qassam attacks had to be answered

The weakest weapon in the arsenal of those condemning Israel for attacking Gaza is the 'Qassams are harmless' canard. Granted, thousands of incoming rockets have only caused a handful of deaths since they began falling, but the psychological impact of the barrage has left an entire region paralysed with fear.

Israel's citizens demand - rightly - that their elected officials take care of their security, as in any other country. Whilst Israel's behaviour towards the Palestinians is reprehensible at best, and criminal at worst, in the context of the here-and-now the collapsing ceasefire and resumption of Qassam attacks left Israel's government with little choice than to act, and act swiftly.

No sane or rational Israeli wishes to see Gazans suffer any more than they wish harm on the residents of Sderot. But, given Hamas's predilection for using Gaza's civilians as human shields, launching rockets from heavily populated towns and cities, taking action to stem the flow of Qassam fire was inevitably going to lead to civilians being caught in the crossfire.
More:
at 11:17 am

All is strange on New Year's Day 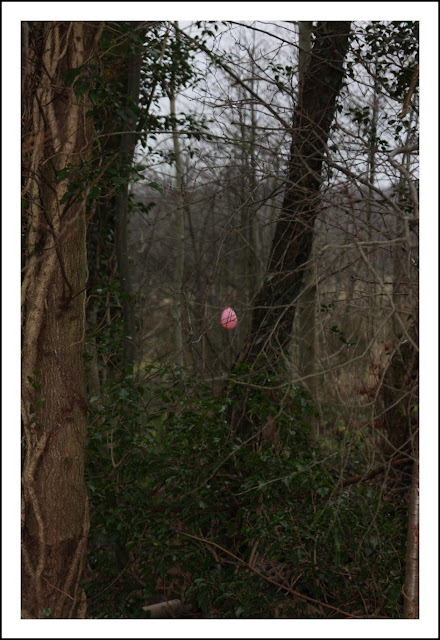 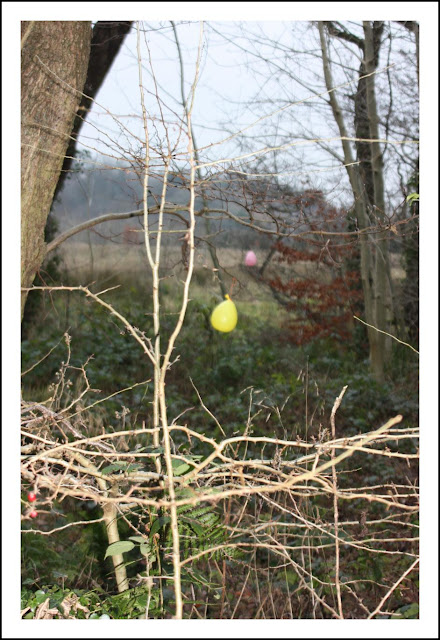 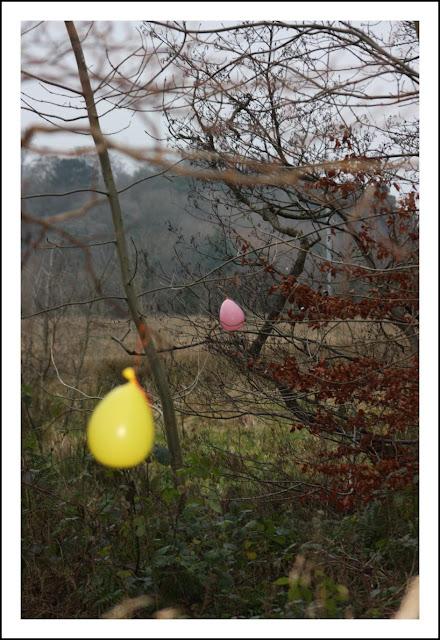 On New Year's day we went for a walk along the Lagan towpath near Drum Bridge and came across these balloons tied to the tree branches. There was no obvious reason as to why they were there - so I can only assume they are the remnants of the teddy bears' picnic. 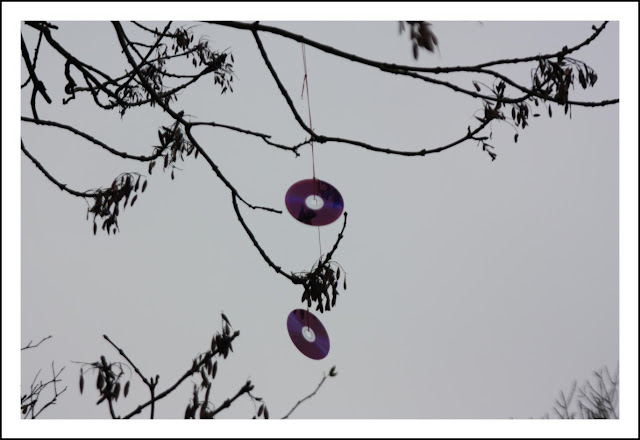 Further along the path were these CD's suspended in the branches of another tree. Very strange! ... and here is something I didn't think could happen with a digital camera - a double exposure!! 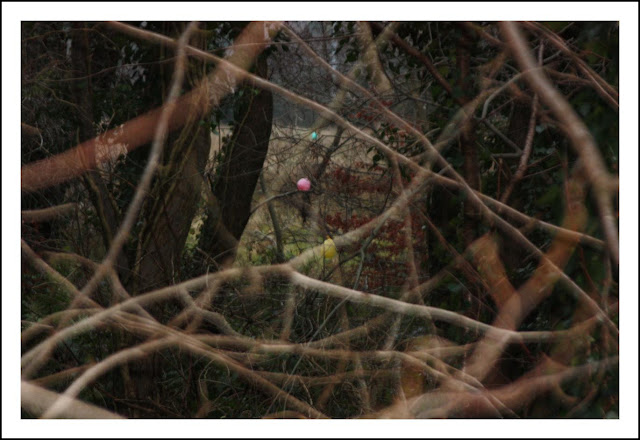 Something strange was definitely going on.

Even by its own dismal standards, Israel's blitz of the Gaza Strip represents a new threshold of savage and reckless militarism. The fourth strongest military power in the world has subjected an essentially defenceless and impoverished population of 1.5m Palestinians to a brutal aerial bombardment, claiming at least 350 victims and more than a thousand injured.

As always, Israeli propaganda has presented the assault as a reluctant response to "terror" ­ specifically Hamas's mortar and Qassam rocket attacks on southern Israel.

There is no doubt that Hamas's military wing should not be firing rockets anywhere near civilian populations, but Qassam rockets are a negligible military weapon compared to the vast firepower that Israel has unleashed on Gaza since its unilateral withdrawal from the strip in 2005. According to the UN, 11 Israeli civilians died from Qassam rocket attacks between 2004 and 2007. In Gaza, by contrast, more than 300 Palestinians died in 2006 alone, a year in which the IDF fired 14,000 artillery shells into the strip. More:


Instead of engaging Hamas politically and allowing it to fulfill its democratic mandate, Israel declared it would not negotiate with "terrorists" and set out to undermine Hamas financially and make it impossible for it to govern.

Western governments have generally limited themselves to hypocritical calls for "restraint" and sanctimonious cant about "unacceptable" civilian casualties, while leader writers and media pundits wring their hands at Israel's vulnerability or engage in "blaming the victim" sophistry. As always, Israeli spokesmen insist on the restraint and humanity of its armed forces and express regret at the loss of "innocent" lives.

For too many Israelis ­ and too many of their supporters ­ Palestinians and Arabs can never be fully "innocent". Even less so when they have had the temerity to elect a "terrorist" government.

Such satisfaction will not last long. Hamas will undoubtedly take its revenge, and Israel will carry out further acts of futile "counter-terrorism". Even as it exposes the fraudulent "peace process" of the last few years, the assault on Gaza will resonate across the Muslim world for decades to come, providing carte blanche to those who believe that if Israel and its supporters can kill with impunity, then so can they.
at 8:21 am