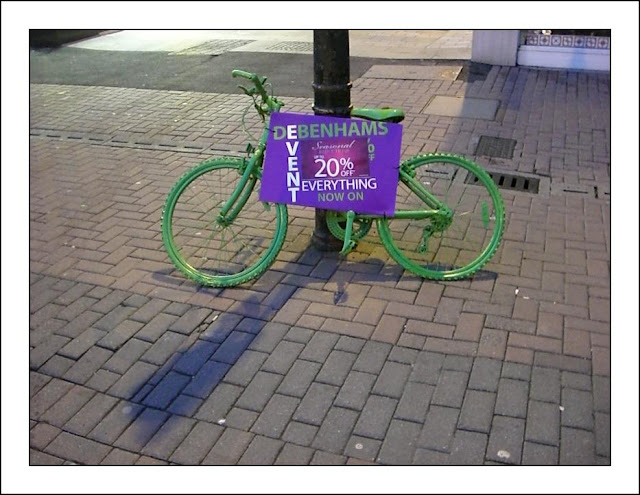 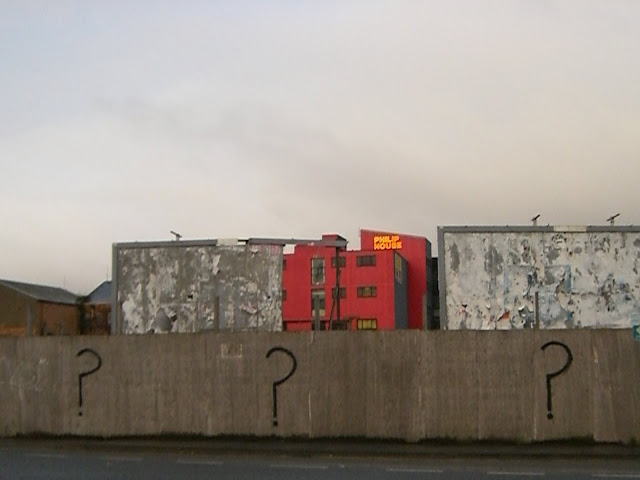 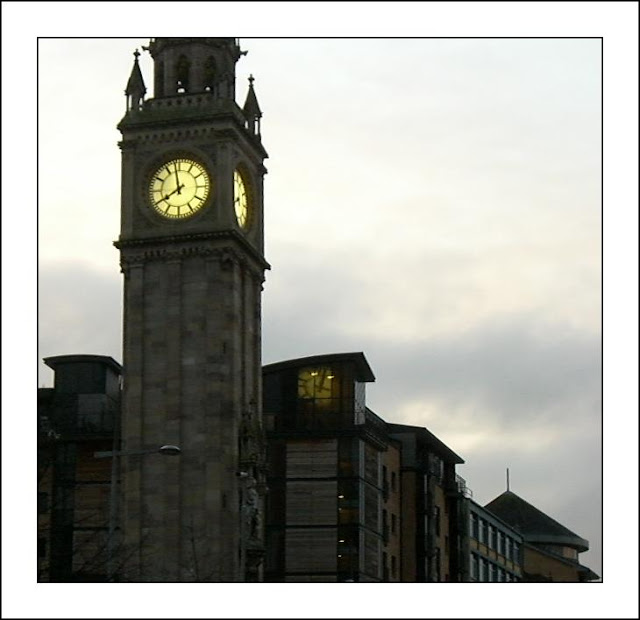 I just took this photo in time - a couple of minutes later the lights in the clock face were automatically switched off and I would not have had the reflection. 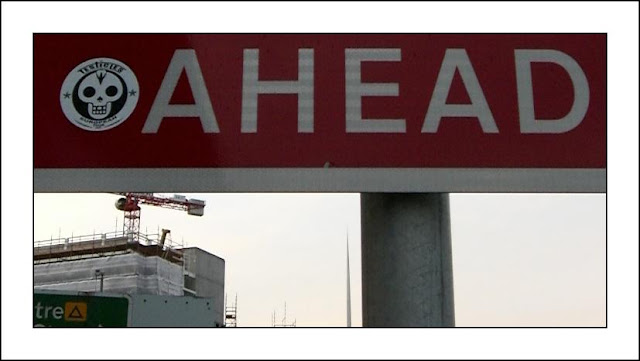 It's a sad sad day for blogging - Cyril Genty has decided to call it a day (or un jour), I for one shall miss his daily photographs of Paris which, I thought, were the best on the web. I hope he returns in another incarnation but I wish him well with whatever venture he is now involved with.
I killed unjouraparis.com from Cyril genty on Vimeo.
... but you can see videos of Un Jour à Paris archive here: 'the end is not the end'
at 6:10 am

I saw her wince, I saw her cry,

I saw the glory in her eye.

Myself I long for love and light,

but must it come so cruel, and oh so bright?

I have linked these two videos because, apart from being a great song, they are interesting in that one is a younger and the other an older Cohen. Interesting, because although it is the same song with the same performer the style is slightly different - apart from the more husky older voice the delivery of the younger Cohen sounds more like a reading of a poem or dirge set to music (which is probably what, essentially, it is) while the older Cohen sounds more seductive.

Last night we attended 'All That Jazz' at the Waterfront Hall - no, not the film but the live concert with Cleo Laine, Johnny Dankworth, Jacqui Dankworth and Alec Dankworth (as Sly & the Family Stone say - 'it's a family affair). This is the one sad and sorry photo I managed to capture before the battery gave up on my wee digital. 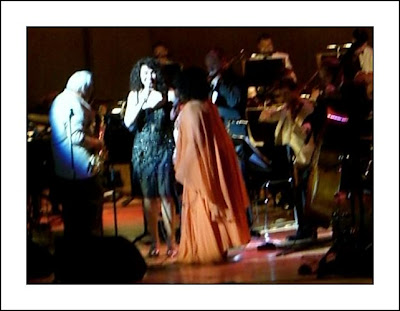 Dame Cleo Laine and Sir John Dankworth (to give them their full titles) are both octogenarians but have more vitality and energy than the likes of Ms Sinead O'Connor - they, and their family, gave an outstanding performance (sadly it was probably not recorded). It was a delight to sit through a concert of highly professional and entertaining performers. Dame Cleo's voice has lost none of its edge over the years, she may have slowed down a bit but there was no diminution in quality. Her daughter, Jacqui, also has a powerful voice and together they were just incredible - their rendition of 'Woman Talk' was, for me, one of the highlights of the night.

This was another of those concerts which we left feeling that we had not been short-changed. Here was a group of people who not only performed professionally but enjoyed what they were doing, as did the audience (from the 5 week old baby to the 90 year old woman - though one of them did sleep through the whole performance). From the word go Johnny, Cleo et al achieved instant rapport with the audience by chatting to (and with) us about the music and even a little bit of family history. It was a night to remember and hopefully one to be repeated - we all hope with Johnny that it will not be another 7 years before they are invited back.

Do I need to say anything?

Who Knows Where The Time Goes?

This is one of those songs that, no matter how many times I hear it, I still enjoy listening to it. If you were to ask me which was the best version I would just have to say, they are all equally great (each artist having stamped their own individual style on it). As for my own personal favourite I have to lean towards Judy Collins. I first heard this song almost 40 years ago outside on a calm quiet night, about 2.00a.m., and the acoustics were perfect. At that time it sounded like the most perfect song I had ever heard and that memory stays with me, even now. I have never heard it performed as well since (even though I have a copy of Judy's CD) - perhaps one night I shall sneak out of the house and try to reproduce that moment.

... and one last one from Nanci Griffith

A great song to introduce you to a great singer.

Miriam Makeba, the South African singer who wooed the world with her sultry voice but was banned from her own country for more than 30 years under apartheid, died after collapsing on stage in Italy. She was 76.

In her dazzling career, Makeba performed with musical legends from around the world — jazz maestros Nina Simone and Dizzy Gillespie, Harry Belafonte, Paul Simon — and sang for world leaders such as John F. Kennedy and Nelson Mandela.

“Her haunting melodies gave voice to the pain of exile and dislocation which she felt for 31 long years. At the same time, her music inspired a powerful sense of hope in all of us,” Mandela said in a statement.

He said it was “fitting” that her last moments were spent on stage.
more:

I won't re-post the links to her videos - just watch them on 'Old School Music Lover' especially Miriam performing in 2007. You would not think she was over 70 years old during that performance.
at 9:55 pm

The Who - Happy Jack

Another great song from the sixties, which I just had to share with all you lucky people. For best effect - play it damn loud !!

Walking on the chinese wall

A few years ago we were in China and one of the highlights of the trip was walking on the great wall but no-one believed me when I told them about this great song. So, here, for their delictation is that very song performed by Philip Bailey. 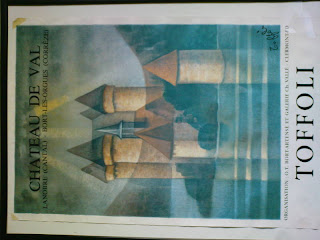 Poster from a French holiday.
Above is a photo I uploaded using my new mobile phone - as you can see I haven't quite got the hang of it but practice makes perfect. Below is an edited version of the poster, which hangs in my bedroom. 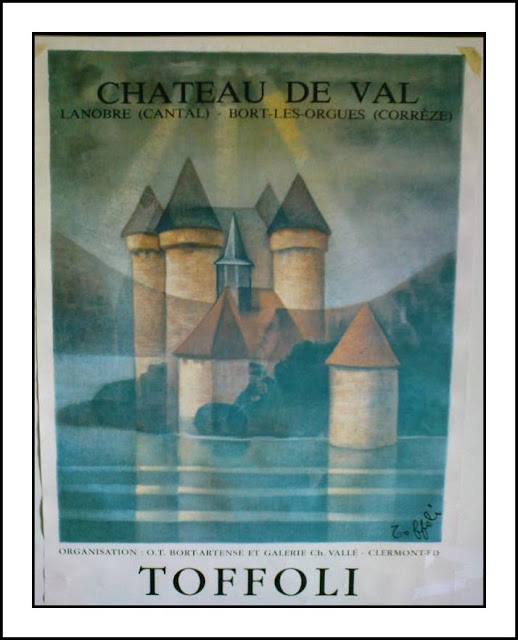 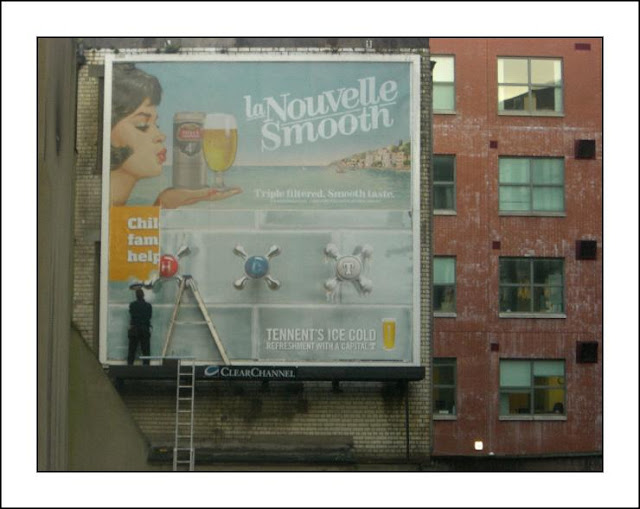 did Glock slow down and allow Hamilton to pass?

I think he threw the race but that's only my personal opinion!
at 11:49 pm