The button above gives a link to culturenorthernireland.org where Anthony Toner discusses his latest album, A Sky For Every Day, with Lee Henry, and plays an exclusive live version of 'Sailortown'.

Sailortown is an area of Belfast, once famed as home to a large community gathered close to the dockland area of the city. Many of that community worked in the docks or went to sea, hence its seafaring name. Much of Sailortown was built on reclaimed land.

It has largely disappeared due to redevelopment and neglect on the part of planners but a vigorous campaign to regenerate the area and preserve St Joseph's, the local Roman Catholic church, has been underway for a number of years. In August 2006, that campaign reached 2,000 days of what it considers to be a "lockout" by the diocesan hierarchy. wikipedia:

The following is from Anthony Toner's blog - 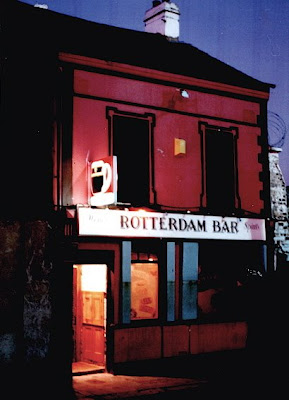 Late last August I played my first ever gig at the Rotterdam Bar in Belfast, with the Ronnie Greer Band. The stage is right in the window of the bar, so when you set your amp and guitar up, you look straight out on the Clarendon Dock. It struck me at the time that the Rot was a lonely little stump of a tooth in this zone that was earmarked for new housing and development. There was emptiness, chain link fencing and cranes and bulldozers everywhere. ......

Jazz Wednesday - Frank Sinatra - Fly me to the moon 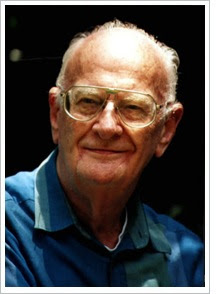 COLOMBO, Sri Lanka (AP) — Arthur C. Clarke, a visionary science fiction writer who co-wrote "2001: A Space Odyssey" and won worldwide acclaim with more than 100 books on space, science and the future, died Wednesday, an aide said. He was 90.

Clarke, who had battled debilitating post-polio syndrome since the 1960s, died in his adopted home of Sri Lanka after breathing problems, aide Rohan De Silva said.

Co-author with Stanley Kubrick of Kubrick's film "2001: A Space Odyssey," Clarke was regarded as far more than a science fiction writer.

He was credited with the concept of communications satellites in 1945, decades before they became a reality. Geosynchronous orbits, which keep satellites in a fixed position relative to the ground, are called Clarke orbits.

Born in Minehead, England, he was the son of a farmer. He worked as a clerk in Her Majesty's Exchequer and Audit Department in London, where he joined the British Interplanetary Society and wrote his first short stories and scientific articles on space travel. AP

Biography on wikipedia:
at 6:51 am 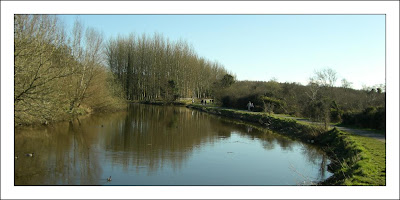 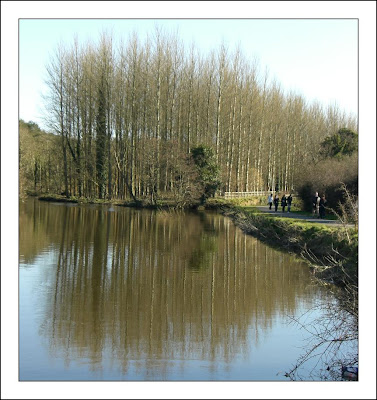 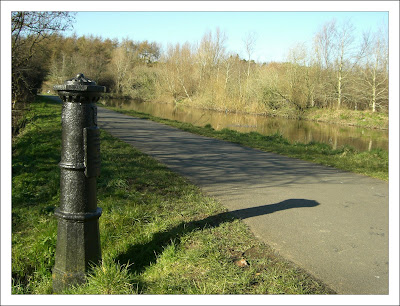 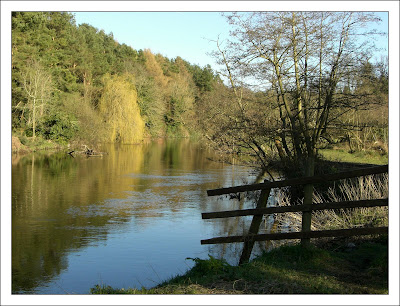 Well, I have to say that the St Patrick's Day parade in Belfast was a total and utter disgrace. The organizers should be ashamed at themselves for allowing such a shambles to go ahead.

According to the Discover Northern Ireland web site:
The 2008 St Patrick`s Day Parade and Concert promises to offer a carnival atmosphere for all the family.
Sad to say, the parade did not live up to the promises and we didn't stick around long enough to see the concert. Instead, we took a relaxing walk along the Lagan Towpath before heading back to one of our favourite pubs for a pint of Guinness.
at 8:03 pm 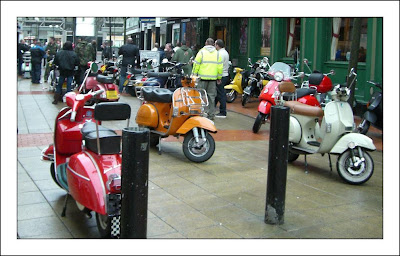 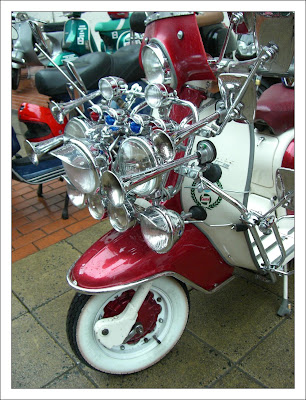 A selection of the scooters that could be seen outside the Deers Head Imbibing Emporium on Saturday.

As you may have noticed I haven't posted for a few days - this is due to having been flat on my back with a dose of the flu. Thankfully I'm starting to recover so to make up for missing Jazz Wednesday here is another great piece of music from the wonderful Candy Dulfer.
at 10:03 am 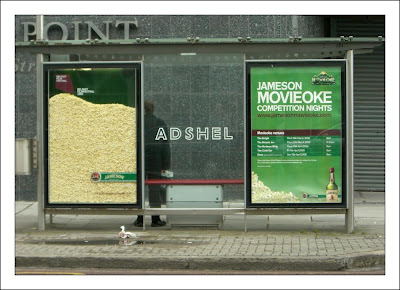 It certainly looks like pop-corn but I will have to investigate further. It may just be a very clever 3D photo or polystyrene beads made up to look like pop-corn but, either way, it's an eye-catching advert.
Read about the event here: and see some of the movies here: (BUT I warn you, some of them are dire)
at 12:37 am 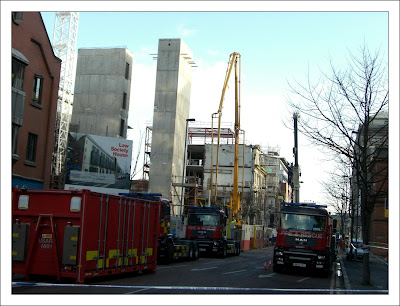 Tonight part of Victoria Street remains closed following an accident at a building site when steel scaffolding and part of the building collapsed after concrete was poured onto the top of the six-storey office block. 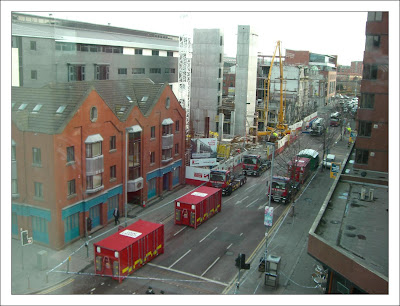 Six workers suffered broken bones in the accident but are in a stable condition in hospital. It is believed that up to 60 people were working on the site at the time of the accident and the Fire Service used specialist dogs to search the rubble, but no-one else was found.

Brendan Collins, 23, was beside the building when the scaffolding crashed to the ground. "It looks like the supports underneath the building gave way, which caused machinery to fall on top of the workers.
"I helped to rescue them. I ran in with four or five other fellas and lifted the machinery off one of them. He was covered in blood and completely crushed."
A workman said: "I was in the cellar at the time. It was like a bomb going off. We all ran. It was
all rubble. We helped the men that were trapped. It was all we could do. I'm in a state of shock myself." BBC: Video: 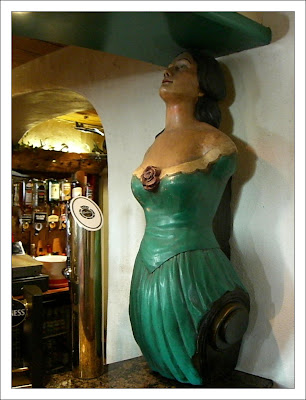 Today we were visiting Killinchy so called into 'Daft Eddy's' where this beautiful piece of marine artwork sits haughtily on the bar.

The name of the bar comes from the illegitimate son of the Londonderry family at Strangford Lough. He was left with a local family (Whites) where he grew up to work with smugglers. He died at their hands in a shoot out in Newtownards Marks Alehouse 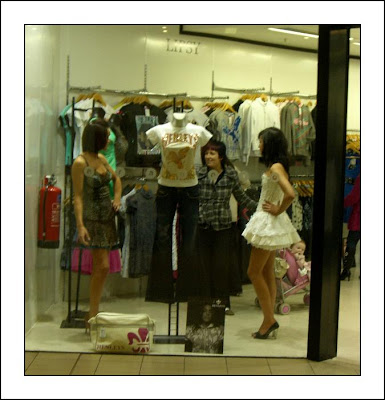 I'm telling you this, if this is what we can expect to see in Castle Court shops then forget about Victoria Square and all of the razz-a-ma-tazz this gets my vote. And I see I wasn't the only appreciative audience.
at 10:47 pm 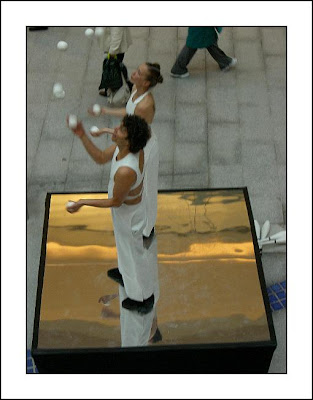 Two jugglers, who were part of the entertainment laid on for the public, at the opening of Victoria Square shopping centre. 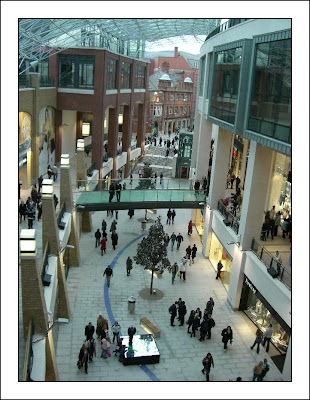 A view of the inside of the centre from the second level. 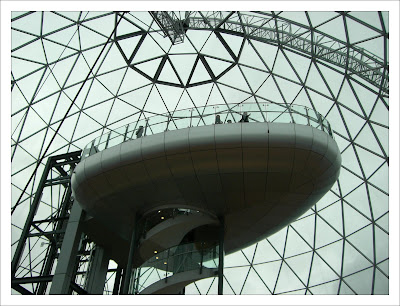 Unfortunately the viewing area was closed by the time I arrived (having been hi-jacked by the BBC for an outside broadcast, which was extremely inconsiderate of them in my opinion) so I had to settle for taking photos on the other levels of the centre. This is the viewing area - looking very much like an alien space craft. 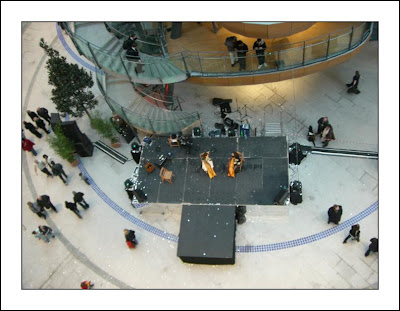 This is the view from level 2 of the harpists on stage on the ground floor. 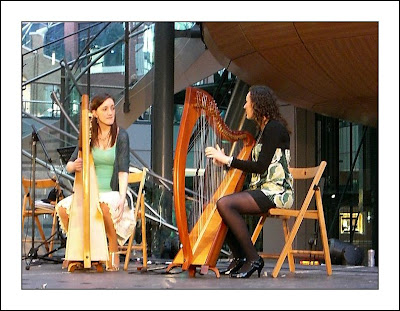 This is the view from ground level of the harpists on stage.
A jazz duo, also part of the evening's entertainment.
I thought all the bloggers of Belfast would have been in attendance but, as yet, I have not seen any other posts. Perhaps they are still at the centre, maxing out their credit cards?
Update:
Alan in Belfast was there for the main event. Andy, Adada, healysequoia and Connormcc have also visited.
at 8:14 pm

Just before the grand opening of the Victoria Centre I thought I would let you see what other fashion retailers round the city centre have to offer. 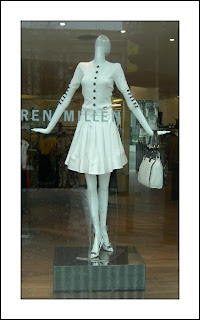 This demure little number is from Karen Millen of Donegall Place. 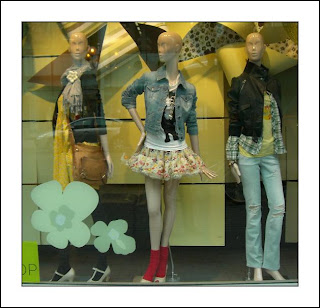 I don't know what you ladies think about the selection but I know what I like - and it's not the dinky little rah rah skirt, which can be found in Top Shop - soon to be found in the Victoria Centre. 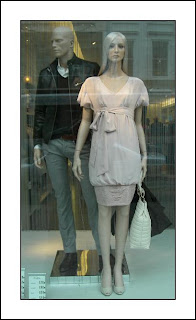 Zara has this sophisticated pink outfit 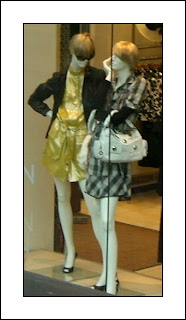 ... and these can be found at Jaeger in Donegall Square West.

I KNOW! - 'you ladies' is not PC but saying 'you wimmin' doesn't have the right ring to it (c: 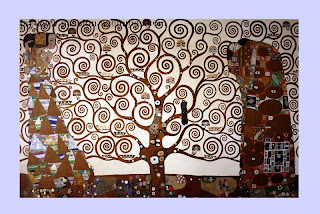 Life's but a walking shadow, a poor player
That struts and frets his hour upon the stage
And then is heard no more: it is a tale
Told by an idiot, full of sound and fury,
Signifying nothing.
William Shakespeare (Macbeth)

"Life! Don't talk to me about life."
Marvin (the paranoid android)

Brain the size of a planet, and they ask me to take you to the bridge. Call that job satisfaction, 'cause I don't.
Marvin
at 9:16 pm 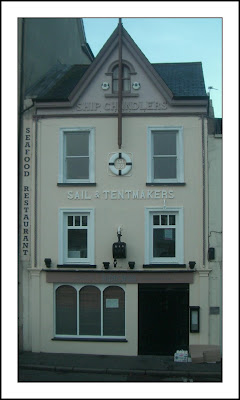 What was once a mid-19th century ship chandler is now a popular seafood restaurant, retaining the original name and original trade insignia. As I am not a fish person I cannot vouch for the quality of the food but I am told it is very good .

James Tedford, who founded the original business, was a Sea Captain
who began his business in New Street in Donaghadee and only moved to the
burgeoning city of Belfast in 1851. He is buried in Donaghadee churchyard. His
move to Belfast was clearly to follow his mentor, James Lemon, who had
successfully moved a similar business to Donegall Quay a few years earlier.
Lemon was also a ship-owner and chandler. In 1798 he had been possibly the only
member of Donaghadee’s wealthy establishment to sympathise with the ideals of
the United Irishmen, and must have spent up to forty years facing down his old
Loyalist and Anglican friends who would never have ceased regarding him as a
one-time rebel. History from Headstones:

I can remember, as a child watching the coal carts being pulled up the small but steep cobbled hill in front of Tedfords and the horses then stopping to be watered at the trough beside the Albert Bridge. On icy mornings another horse, which was tethered to the wall which gave on to the railway track, would be hitched to the front of the cart to assist in the struggle up the hill.
at 8:49 pm

Victoria Wood - Let's Do It

I can't believe I haven't posted this before. It's classic Victoria Wood comedy. 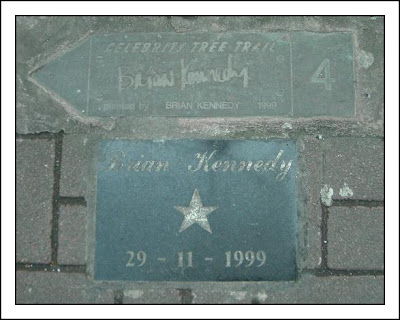 This is a photo I took of a plaque beside a tree planted by one of Belfast's famous sons (Brian Kennedy). It looks quite pleasant, doesn't it, but click to see the larger pic and have a look at the surrounding area and you can't help but notice a few items that both blueboat and myself have been sounding off about recently. 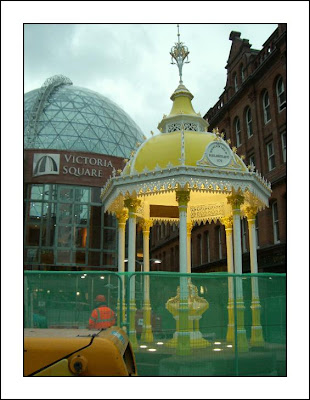 The new Victoria Square complex is to be opened shortly and at present they are busy putting the finishing touches to it. The Victorian style fountain which has just been erected is in memory of Daniel Joseph Jaffe who, in 1852 with his wife Frederiké, brought their family of four boys and five girls from Hamburg to Belfast and along with his older sons, Martin, John and Alfred, set up a business exporting linen.

However, it is the legacy of the son – Otto – that often overshadows his father’s testimony. Louis Hyman’s account of Sir Otto’s life records this most distinguished of Daniel’s children as “shrewd, sharp-witted, far seeing and [whilst] almost parsimonious in business, he is lavish in unostentatious charities”. Otto was elected a city councillor in 1879, was elected as Belfast’s first Lord Mayor in 1899 (as mentioned the first incumbent of the title under the new status of the city as a county borough). He was knighted after his first term, served as High Sheriff and was re-elected as Lord Mayor in 1904. Sir Otto’s interest in education extended not only to the primary education of Jewish children in the Cliftonville Road School. He was also a pioneer in the foundation of Belfast’s Technical College and contributed £4000 to Queen’s University. History from Headstones:

I do hope they are going to paint over that garish yellow colour.

UPDATE from Alan in Belfast:

The Jaffe Fountain began life in the 1870's in Victoria Square, Belfast. It was
moved out of the city centre and up to Botanic Gardens in 1993. But today (14th
Feb 2008) it was returned to its home in Victoria Square.

An interesting old photo of Victoria Square, with fountain, circa 1910 can be seen here:
at 10:10 pm 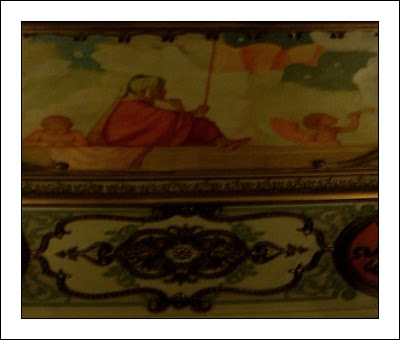 On Thursday we spent the evening at the Grand Opera House (along with our daughter) where we started with a lovely meal in their new restaurant (Luciano's) before heading off to the 'South Pacific'. A pleasant evening all round.
The photo above is of part of the frescoed ceiling.